A vertical growth for Barcelona

Barcelona is a city in constant demographic and economic growth, trend that is expected to continue in the future. The growth is extensive and unsustainable. The next enlargement will not be towards outside, but inner growth. The Eixample is the core of this growth.

SuperEixample will support, feed and empowers this next evolution thanks to the insertion of hybrid complexes within the Eixample’s tissue. In one hand they are population cores that increase density. In the other hand, nodes that serve the city acting as hypertrophied programatic complexes that boost their environment.

The Eixample was a project marked initially as unreal and megalomaniac. It was conceived as a homogenous grid that will fight the radial scheme. After some time this originally oversized grid system was not only surpassed, but became the core of a huge centered metropolitan region, amplyfying the problem that tried to fight.

Obsolescency and massification of nowadays infrastructures are some of the consequences: the city doesn’t belong to people anymore, but to cars. Todays’ city activities and his related traffic, nourishment or energy, are based in a model that strives an enormous pressure on support systems. A change in energetic models, production models and consumption models is needed, but not enough. The Eixample’s tissue, although being formally quite homogeneous, has a great variation power. Attending to this variations and distance criteria, I choose several nodes in the city. Final goal would be summarized in «grow to reduce, in order to grow».

Any organism’s endurance is based not in its toughness, but in its adaptability. Goal is not only an extrussion of the existing, but the real invasion of vertical axis. The three-dimensionalization of the city would imply to bring anything positive that today happens in the street level to locations different to level zero. SuperEixample is not only developed in the Eixample, but over it. The intervention is divided in five fundamental parts: underground, ground level, legs, horizontal block and towers.

The legs carry the upper horizontal block, but they are also equipped. Professional, residental and facilities are mostly their use.

The horizontal block is the main element. It’s feeded by, and serves the city. Its program it’s defined both by closeness factors, and direct relationships non-distance related, but urban tissue related. Mainly they are facilities and public uses.

The towers finally are dedicated to living spaces. They look for maximum flexibility through an open plan, but thanks to a modular facade system, that allows variation, reforms, extension, customization… 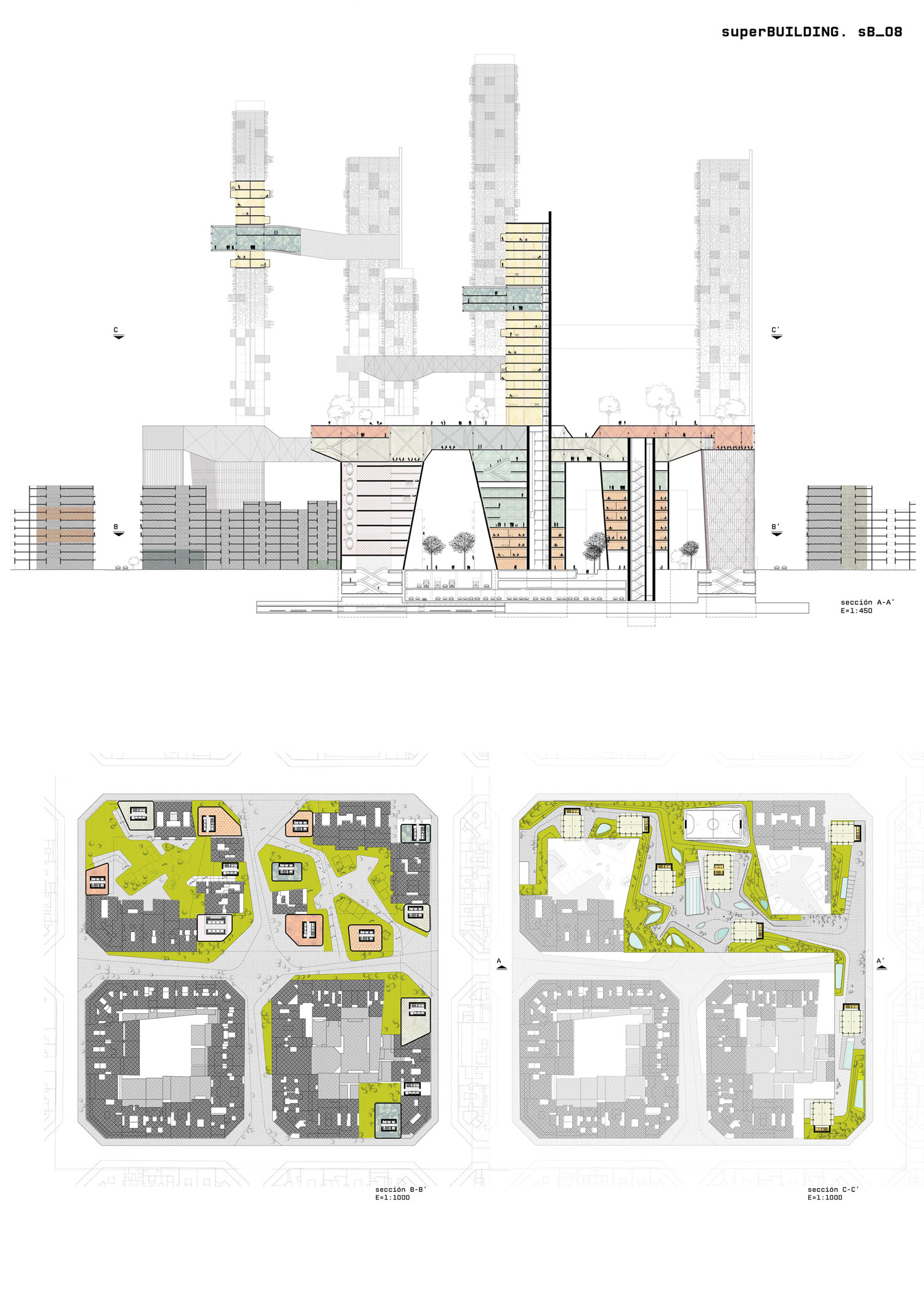 Image tweaked at his maximum by Carlos Mazon, from Wire Collective.